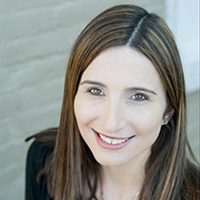 Michelle Rajotte is an alum of the Total Leadership Program, and joined our team in 2010. Prior to that she served as an officer in the United State Air Force, as well as a Director of Operations for a marketing agency.

After earning a BS in Communication and a BS in Marketing, Michelle answered the call and joined the Air Force. She managed budgets and cost estimates for various space systems and served as an executive officer to the Wing Commander, but coaching and mentoring were always close to her heart. In addition to her regular duties, she spearheaded the creation of a junior office advisory board to the 3-star General Base Commander, developed and implemented a training program for new 2Lts that was adopted Air Force wide, and launched multiple mentoring and coaching initiatives involving 300+ officers and cadets at military installations across the world. For her efforts Michelle was recognized as the Company Grade Officer of the Year by the Los Angeles Air Force Association.

As her time in the Air Force came to a close, Michelle set her sights on the business world and earned her MBA from The Wharton School at the University of Pennsylvania. It was during her time there that she was introduced to Total Leadership, and a few years after she graduated she joined our team as Director of Client Services. In this role Michelle brings all of her program management skills to bear as she manages the cradle to grave implementation of our program to students and clients worldwide, and she coaches our students in the executive and full-time MBA programs at Wharton.