Since the 1990s, our field and survey research, conferences, and innovative initiatives in education, organizational change, and social policy have contributed to understanding and dialogue about creating harmony between work and the rest of life. Please visit the Wharton Work/Life Integration Project (founded in 1991) for more on this history and impact.

In March 2021, Stew Friedman and Vicki Shabo, a senior fellow for paid leave policy and strategy at New America, organized a letter -- signed by  almost 300 business and management school faculty from schools from nearly all 50 states – sent to the President and to Congress urging prioritization of national paid family and medical leave as an economic and business imperative, part of a care infrastructure.  “As we rebuild in the pandemic’s wake,” said Friedman, “paid family and medical leave is an economic necessity for working families that stimulates growth, strengthens our competitiveness, promotes gender equity, and reduces racial disparities. Let us be a leader among nations, and not a laggard, in giving all workers and businesses access to paid leave. Now is the time!”

The March 2021 letter argues that national policy modeled on state programs would establish a baseline that would allow every worker and business the certainty of access to paid leave. Evidence from states, the private sector, and international examples show the value of this policy for workers and businesses. It follows a similar initiative when, in 2015, Friedman and Shabo marshaled a letter to Congress from more than 200 U.S. business and management school faculty from more than 80 schools, including from the top 25 schools, urging swift consideration of the FAMILY ACT. The initiative was widely covered in the press, including in The Washington Post, Bloomberg, and CNN.

In both 2013 and 2020 Friedman spoke at the U.S. State Department about the application

of Total Leadership principles and methods for improving productivity and reducing stress for its staff worldwide. He conducted small-group workshops, consulted with senior officers, and gave a well-attended lecture in the main auditorium in which he explained how Total Leadership tools could help members of the State Department find creative ways to manage the intense demands of their work roles while fulfilling their aspirations in other parts of their lives.

In 2011 Friedman was the opening keynote speaker at the U.S. Department of Labor’s National Dialogues on Workplace Flexibility conference in New York. 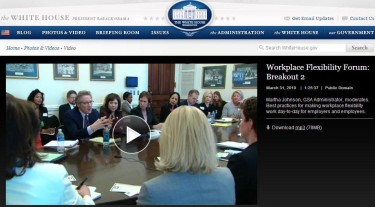 In 2010 Friedman was invited to attend the White House Forum on Workplace Flexibility, hosted by the President and First Lady. He was among the small handful of academics invited to participate in this forum. Afterwards he was interviewed on ABC News about the historic significance of this conference. At the White House he discussed the Wharton course in a session with Secretary of Labor Hilda Solis.

In 2010 Friedman was invited to speak at an Expert’s Forum at the United Nations and to consult to that organization on initiatives to transform the workplace to make it more hospitable for women.

In 2003 Friedman was asked by American Psychological Association President Diane Halpern to contribute to a task force she created on bringing work/life research to bear on policy and practice, and he served as moderator for a panel on child care at the APA annual meetings that year.

This landmark gathering in 2000, co-sponsored by the Wharton Work/Life Integration Project, brought together 75 thought leaders and decision-makers from outside the traditional circle of those directly concerned with child care and work/family issues.  Leaders from the business community sat side by side with those from the political arena, the advocacy sphere, and academia.  Among those present were the mayor of a major city; legislators from several states; executives from industries as varied as manufacturing, financial services, transportation and healthcare; and leading experts on policy issues.  The conference enabled meaningful dialogue across sectors.  Working groups collaborated on identifying programs and partnerships to benefit all working families.

Our early contributions in the work/life field were recognized

when Stew Friedman was asked to participate in an eight-member task force on designing a national work-family conference, Vice President Al Gore’s Family Reunion V: Family and Work Expert’s Forum, held in Nashville in 1996. He met numerous times with the Vice President and Friedman was one of four panelists in a session that he moderated at the conference.