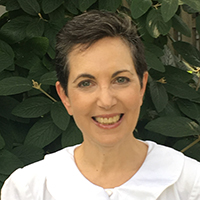 Hallie Friedman, our Director of Operations, earned her B.A. in Psychology from Johns Hopkins University in 1980 and her PhD in Clinical Psychology from the University of Michigan in 1989.   In addition to her responsibilities running our office, as a licensed clinical psychologist Hallie advises our client services team on theories and methods of personal change.

After practicing as a psychologist in the Philadelphia area in the 1980’s, Hallie became a full-time at-home mom until her and Stew’s youngest child was in middle school, when she joined the Total Leadership team.

Starting in 1994, when their eldest was in first grade, she devoted over a decade to countless roles in the elementary, middle, and high schools and served for years on the district’s Inter-School Council.  Hallie focused primarily on e-communication among parents; an effort she spearheaded in the elementary school and then brought to the middle school.  To launch this initiative, she advocated successfully with the School Board and Superintendent and a wide range of stakeholders.  After founding the elementary school e-newsletter, Hallie edited the listservs at the elementary, middle, and high school levels, greatly expanding the upper school’s e-communications reach, enriching connections among members of its community.  And with Stew she co-founded the Lower Merion High School Ultimate Frisbee team in 2005.

Hallie has been active in local issues since the 1980s, including a successful campaign against cell towers on school grounds, stop signs on school bus stop corners, and High School voter registration drives.  Her political activism inspired all three of our children to be politically engaged citizens. Since 2014, she has served on the E-Communications, School, and University Outreach Committees of NAMI Pennsylvania’s Mainline group.