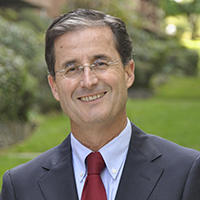 Carlos runs our client services team’s office in Madrid. He first discovered Total Leadership in 2008, when the book was published, and was impressed by its common sense and the power of the methodology. He studied Total Leadership while he was Professor at Universidad Politécnica de Madrid (UPM), directing two master theses on Total Leadership, teaching it in different UPM courses, and collaborating with other organizations, such as Instituto de Empresa (IE) in Madrid, where he taught TL in the International MBA curriculum. In 2015, he translated the book into Spanish,in collaboration with Gonzalo Landaluce, to inspire Spanish organizations and society. As an example of what people are saying about the impact of Carlos’ work in delivering Total Leadership in Spain, one client said: “What I liked was the modern view about leadership and the promise to be able to harmonise professional and personal life.”

He has many years of experience working as an executive in the Spanish financial sector. His last corporate position, until 2015, was at Grupo Santander as Santander Seguros’ General Manager and Board Member. From 1998 until 2003, at Citibank Spain, he was a member of the Executive Committee responsible for Strategy, Marketing, and Products. Carlos also served as member of the Board at Visa España, Servired, Citigestión, Citipensión, and Citioperaciones. From 1994 until 1998, he worked at Banco Central Hispano (today Grupo Santander), ending as Deputy Managing Director responsible for Customer Segments, Products, and Marketing in Spain. Previously, he worked as consultant at McKinsey & Co and as Systems Engineer for Iberia Airlines.

In 2015 joined the faculty of ESCP Europe’s Madrid campus as an Associate Professor in the Finance Department and he is the Academic Director of the MBA in International Management. He is member of the Board as Independent Director and President of the Audit Committee at Nationale Nederlanden in Spain. In 2016 he co-founded OpSeeker, a fintech start-up created and managed by ESCP Europe Alumni. Carlos is a Spanish citizen, happily married and proud father of three. He is interested in enjoying life, growing personally and professionally, and helping others improve their lives.